Difference between revisions of "Thailand"

Thai food alone is reason enough for a trip to Thailand. Curries, fruit shakes, stir fries, fresh seafood made many different ways, this is just a start.

Food in Thailand is cheap and at 25 Thai baht (approximately $0.70 USD) you can get a pad thai (Thai fried noodles) cooked at a street stall or at a floating market [1].

Food from stalls and tiny sidewalk restaurants is usually quite safe. At street restaurants, you can see what you'll get and everything is cooked on the spot.

Thai cuisine is characterized by balance and strong flavors, especially lime juice, lemon grass and fresh coriander. This combination gives Thai food its distinctive taste. In addition, Thai food has a deserved reputation for being spicy, with hot chili used in many dishes.

The Thai staple food is rice (ข้าว khao), so much so that in Thai eating a meal, kin khao, literally means "eat rice". 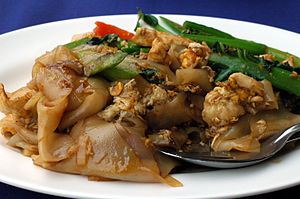 Unlike other Thai foods, noodles are usually eaten with chopsticks. They are also usually served with a rack of four condiments, namely dried red chillies , fish sauce, vinegar and sugar which diners can add to their own taste.

The line between soups (ต้ม tom, literally just "boiled") and curries (แกง kaeng) is a little fuzzy, and many dishes the Thais call curries would be soups to an Indian. A plate of rice with a ladleful of a curry or two on top, known as khao kaeng (ข้าวแกง), is a very popular quick meal if eating alone.

Thais like their mains fried (ทอด thot or ผัด phat) or grilled (yaang ย่าง). Fish, in particular, is often deep-fried until the meat turns brown and crispy.

About the only thing Thai salads (ยำ yam) have in common with the Western variety is that they are both based on raw vegetables. A uniquely Thai flavor is achieved by drowning the ingredients in fish sauce, lime juice and chillies - the end result can be very spicy indeed! 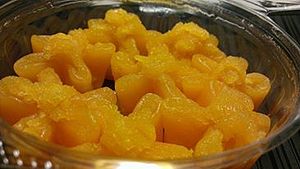 In Thailand, there are many varieties of desserts. Most Thai people like to eat desserts that are made from coconut milk.

Vegetarians won't have too many problems surviving in Thailand, with one significant exception: fish sauce (น้ำปลา naam plaa) is to Thai cuisine what soy sauce is to Chinese food, and keeping it out of soups, curries and stir-fries will be a challenge.

That said, Thailand is a Buddhist country and vegetarianism is a fairly well-understood concept, especially among Chinese Thais (many of whom eat only vegetarian food during several festivals). Tofu is a traditional Thai ingredient and they aren't afraid to mix it up in some non traditional dishes such as omelettes (with or without eggs), submarine sandwiches, and burritos. Since Thai dishes are usually made to order, it's easy to ask for anything on the menu to be made without meat or fish. Bangkok features several fantastic veggie and vegan restaurants, but outside of big cities make sure to check that your idea of "veggie" matches the chef's.

Some key phrases for vegetarians:

Visitors entering Thailand are required to prove they have sufficient funds to cover the length of their stay, and should hold documentation for return/onward travel.

However, guaka and amylin, coming with Dutch and American passports, no documentation and no onward tickets, didn't experience any troubles.

Ordinary passport holders of most countries, including the United States of America, Canada, European Union countries, Russia, Japan and Australia, do not need a visa if their purpose of visit is tourism and if their stay does not exceed 30 days. Thai immigration requires visitors' passports to have a minimum of 6 months validity and at least one completely blank visa page remaining. Visa-on-arrival is available at certain entry points for passport holders of 20 other nations, including India and China.

Types of visa and cost

There are even more\ types of visas:

Bangkok is Thailand's capital and biggest city, is a transport and visa hub for South East Asia. You can find many low budget flights and a lot of embassies and consulates here.

Thailand is a country in Southeast Asia.