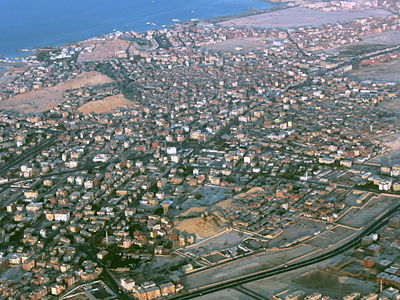 Al-Gouna: a compound on the suburbs of Hurghada.

Hurghada is one of the most touristy cities on the Red sea coast and the third largest city in Egypt. The city itself was founded in early 20th century due to huge touristic potential. Before that it was barely known fishIng village.

It appears to be a hard place for nomads but you can still find some cheap stuff and hospitable locals.

There are minibuses driving through the city, which cost 1.5 EGP(~0.2 EUR) per ride (but usually the driver doesn't care if you don't pay). Be aware of taxis. The taxi drivers in Hurghada have incredible ability to see foreigners from very large distances and appear in front of you in no time. Taxis can be very expensive compared to public transportation.

It's hard to get free accomodiation in Hurghada, but it's easy to find cheap hotel room (2-3 EUR/night). Wild camping can be quiet hard in public places because people are out literally 24/7. Try to go about 500 m out of the city into the desert and camp there (DON'T FORGET WATER!!!). Also try Couchsurfing or other networks like this. During my visit people appeared to be very hospitable so don't bother asking around for a bed.

When looking for cheap food, don't eat in McDonald's or other western fast food chains. In many places in the city you will find falafels which are very cheap and good (0.5-1 EGP or 0.05-0.1 EUR). Also try the food market in Hurghada downtown (Al-Dahar) where you will need to bargain the price but the sellers won't be as pushy as in other places in Hughada. Usually the dumpster diving van be very successful in the back side of huge hotel complexes.

There are many cafes with free wifi, but you will have to order a drink. Instead of this, go to a hotel which offers free wifi at reception but before doing that take a shower and dress well so you will look like a tourist that paid a lot for a room in this hotel.

Although Hurghada is a place to be for people with a lot of money, there are also great possibilities to make some money. If you have good language and social skills go from hotel to hotel and ask if they need someone in animation team. It's very easy to get work there since you won't be given any contract and you can work as long as you wish or as long as your boss wants. You will be well paid and given unlimited food an a bed for the time you work.